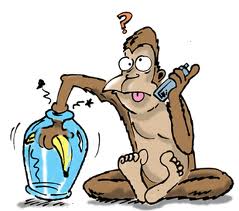 Many folks I've met of the "boomer" generation don't seem to share the same sense of urgency about environmental and climate issues as the younger generations.  My father, for instance, often cites massive improvements made in the US over his lifetime, such as the fact that the Cuyahoga river no longer catches fire, or the fact that there is no longer a 20 mile long black cloud downwind of Gary, Indiana.  When an environmental problem became unbearably bad during his life, it was generally taken care of in one way or another, and I suspect that most members of his generation have been conditioned to think that we can take care of any problems after they occur.

The problem is that the issues we're now encountering are global in scope, and are fundamental risks to the very life support systems we require to survive.  We can't just move away from them until they're dealt with.  As they grow worse, our ability to deal with them decreases as we become more concerned with surviving the day instead of the decade or century.

While this is disconcerting enough on its own, there's an even bigger problem.  Our use of fossil fuels has doubled approximately every 20 years.  Roughly 75% of all the fossil fuel ever burned has been burned within the last 40 years.  It takes a minimum of 40 years for our carbon emissions to take effect, as a result of  the biosphere's thermal inertia (oceans in particular).  This means that we need to react 40 years before the changes take place if they are to be avoided!

Another complicating factor is the fact that the changes we make are not linear in nature.   Early on, most of our emissions were absorbed by the oceans or by plant life, but we've long since exceeded the absorptive capacity of the biosphere, as evidenced by the recent dramatic climbs in atmospheric carbon.  We've now triggered some massive feedback loops which will exacerbate our emissions even further.  Climate change has turned the Amazon rainforest -- a massive carbon sink -- into a carbon emitter, as drought and wildfire sweep through the formerly lush forest.  Changing climate zones mean that the forest outside your home will most likely be gone within 20 years (forests can handle slow change -- which isn't what we've triggered).   Carbon stored in the arctic refrigerator as soil organic matter in the permafrost, or as clathrates in the arctic ocean is now venting into the atmosphere at explosive rates.  Should we wait to see what happens? 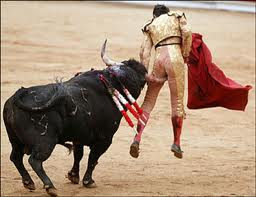 The attack came swiftly, while I was seated with my back turned.  The bull drove his horns into the small of my back and twisted, attempting to knock me over so that he could trample me and finish the job.  I braced myself to stay upright, away from his deadly hooves.  He relented for a few seconds before returning with renewed vigor, swinging his head from side to side and prancing about like a boxer in the ring.  I turned back to face him as he approached the second time.  He slowly drew close, sniffed my beard, wrapped his tongue around it and tried to pull it off (I suppose it looks a bit like hay), shortly before ambling away to lick one of our barn cats.  She loved the attention.

Fortunately for me, Gomer the bull is only eight weeks old and doesn't weigh very much.  His horns were about the size of a really big pimple before we burned off the buds. When he's not attacking me, he's a vicious killer of straw bales.  Juniper, his 350lb year-old accomplice (who does still have horns), is experiencing a renewed youth inspired by Gomer, and now attacks me regularly as well.   She's mostly looking for a good chin-scratching though.

We've thus far been using AI for our breeding.  That's AI as in Artificial Insemination -- we won't be using the other type of AI here (our farm is robot-free!).  Initially I had outsourced it, but finally took a course and have been doing it myself for a little over a year now.  Aside from the initial elation associated with sticking my arm up a cow's butt, I can't say I've been all that impressed with it.  We've had some successes, but not nearly what I'd hoped for.  So, when our cow Gertie gave birth to a bull calf, I decided that we might try something different.  If a bull isn't castrated, there is a window of perhaps 6 months during which he will be capable of breeding but not yet aggressive.

Jersey bulls have a reputation as the worst of the worst, though I've seen a few which were fairly docile.  I'm a little apprehensive of taking this route, but we're going to give it a try.  Chances are we'll butcher him as we would a steer at around two years of age, but hopefully will get some cows bred as part of the deal.  It's just like getting to "have your cake and eat it too", only a bull isn't typically covered in rich and creamy frosting.

Before I started kindergarten, two of my favorite books were Dr. Doolittle and Where the Wild Things Are.  I loved the idea of working together with animals, especially big ones.  Even if they were monsters.  Perhaps there's some epigenetic memory embedded in the recesses of my brain, of experiences had by my father or his parents back on my great-grandparent's farm.  Judging by my last name (Veale), the fascination with cows has spanned quite a few generations.

Though I would've at one time been horrified by the very thought of being tied to the daily dairy chores without end, there is a certain enjoyment that comes from a daily routine with these gentle beasts.  They're affectionate, playful (seen this video of our first cow?) creatures, with loads of personality.  It's easy to grow attached, and think of the cows as friends.

The downside to all this is that the primary purpose of a dairy is to produce milk.  When a cow doesn't respond to breeding, (as appears to be the case with two of my favorites), she ceases to produce milk.  She then becomes an enormously expensive pet, whose best use is to become hamburger.  It's tough to turn your friends into hamburger, but such is the life of a dairy farmer, I suppose.  I'm still holding out hope though... both Maggie and Josie skipped their last heat cycle.  Maybe they read my thoughts and decided they'd better get pregnant if they didn't want to visit freezerland.  I've got my fingers crossed!