A few years ago when we moved aboard our sailboat, Rachel discovered that I have a penchant for becoming singularly focused. The boat needed work, and that's just about all I could think about for the first year we lived aboard (or, arguably, for the 5 years we owned it). While my focus was probably good for getting the boat whipped into shape, it wasn't exactly a recipe for marital bliss.

Before we moved to Michigan, I was warned that there would be trouble if my obsessive-compuslive nature returned. I'm doing my best, but this time of year is particularly difficult. Our pasture is starting to grow again, and I need to get it fenced in so our animals can use it. The barn still needs some work. The garden needs to be prepared, and I need to prep a couple acres for my field corn. I need to get our 7 cords of firewood cut so that it has time to dry before we need it again next winter. We need to cut fenceposts for putting up our perimeter fence. After purchasing two loads of hay that our animals refuse to eat, the pressure is on to find some that they *will* eat. The hay mower needs to be rebuilt, and the trim in our house needs to be finished, the basement needs to be cleaned up, insulation needs to be finished, I should really rewire the basement lighting, and fix the cellar doors, and...

Earlier today, Rachel and Henry were playing with a big ball of his. Buttercup ran up to the fence and bellowed at the ball. So, Rachel threw it into her pen to see what she would do. Buttercup clearly enjoyed herself, but I can't say the same for the ball.

Our barn has an old pigeon coop built up above the hay loft. It's been vacant since we moved in, but we had some visitors today. I think I even heard some pigeon hanky-panky going on, so perhaps there will be more soon.

Ashley the goat is still kicking. No more runs, but she's very weak right now. The worms and coccidosis appear to be gone, but we don't know if she has another ailment or if she will slowly recover. At least she can lounge in the sun these days rather than shivering in her stall like she was a couple weeks ago.

Spring is definitely here now, at least for the time being. Our ponds are about halfway melted out, and I hear frogs in the evening now. Sandhill cranes are prancing around in the field again, and the mourning doves have returned. The fun we've really been waiting for -- mosquitoes -- are starting to annoy once again. I'm hoping tomorrow evening's forecast of 21 degrees takes care of them for the time being.

The deer are out in our pasture nearly every morning and evening. At first I thought it was pretty neat to see, but now I'm starting to wonder if I really like that, and have started chasing them off. I'm trying to grow these pastures while they're trying to eat them, and there are quite a few out there. Hmmmm....

Spring is teasing us a little more this week. 70 degrees today made the memory of last weekend's single digits grow dim and fuzzy. But -- since this is Michigan, we know the warmth is only temporary. Rachel did notice the first robin of the season though, and the cardinals have started singing their "spring" songs.

We got out for a little ice skating earlier in the week; perhaps the last of the season. Today we walked out to the same pond after dinner, and the ice was already melted several feet from the shore in places.

Our goat Ashley is turning out to be the veterinarian's best friend. Or worst nightmare, depending on how you look at it. About a month after we got the goats, she had a serious bout with worms that lowered her milk production enough that we decided to dry her off. Worms are a common problem with goats -- most goats get wormed at least 3 times annually, but usually just during the warmer months. We had been using an herbal wormer, but it apparently doesn't handle heavy worm load very well. Ever since then, she's been getting wormed again and again, with ever increasing frequency. Her partner in crime -- Mary Kate -- seems to be a model of vibrant health. 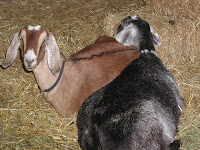 A few weeks ago, it got to the point where (shortly after being wormed yet again) she had developed bad diarrhea. I quickly learned not to stand within 15 feet of her fanny when she sneezed, because she was firing out both ends. The vet's new diagnosis was coccidosis (a microbial infection normally affecting only young goats). We treated her for that, and she started to firm up a bit, and then quickly reverted to her former state.

We've been supplementing her copper intake, as that's a common deficiency with goats that can lead to these sorts of problems. She gets more coccidosis medication, enterotoxemia treatment, pepto-bismol, pro-biotics, vitamin B injections... but her rocket-rump still persists. It's clear that her immune system is not up to the task, but there doesn't seem to be a good way to tell what the reason is. All we can do is remedy the common causes (such as copper deficiency) and hope that we get it right before she keels over.

On a "real" farm, where each animal is viewed with an eye towards cost/benefit, she would've been disposed of long ago. She seems relatively happy for now, but there's a good chance that she'll have to be put down if her problems persist despite various treatments. If it comes to that, I'll be the one to do it, and I'm not really looking forward to it. I guess that's one of the not-so-fun parts of playing farmer.

We picked up a horse drawn hay mower last weekend - a McCormick Deering #9, which I'm very excited to try out. I'm thinking that horses won't be coming for another year yet, but maybe this fall if our pasture looks good and our hay stores are healthy. I'll be taking a 4-day course in draft horses later this month, which I'm really looking forward to as well.

Buttercup the cow is growing ever more sociable. She moos back to me when I talk to her now, and occasionally turns around in her stanchion at milking time to give me a big goobery kiss. Whenever I have some work to do in the barnyard, she wanders over to see what's up. She's also pretty responsive. If she comes into the barn when she's not supposed to (such as when I'm out forking her manure into the compost heap), all I have to do is tell her "no" in a stern voice and she skedaddles back outside. She clearly knows when she's being bad.

Buttercup has also developed a fondness for the barn cats. Whenever the opportunity presents itself, she reaches down to "groom" them with her monstrous tongue while they cringe in disgust. Even if I don't catch her in action, I know when she's been playing barncat hairstylist, because the cat looks like she was attacked with a can of hair mousse.