We've had the buggy out a few times now, with Rachel and Henry even daring to ride.  Bobby has been doing well;  occasionally shying from odd things at the side of the road (such as a plywood silhouette of a horse and buggy), but behaving well around traffic.  We'll give him a little more time on the backroads though before I dare to venture with him into town.

Due to my lack of experience, I wasn't exactly sure how hard I could push him.  I let him walk up most small hills and continue walking for a while after each one so that he could rest up.  But then on a return leg, he voluntarily trotted up each hill with no hesitation whatsoever.  It's apparently much easier to pull the buggy towards home than it is to pull it away from home.

We've started harvesting some of our corn, an open pollinated variety called "Henry Moore".  The tallest stalks are about 14' -- some of the ears are sitting at over 8'.  The deer were nibbling at it when it was in the silk stage, but have pretty much stopped since then.  Henry and I harvested a small garden wagon load by hand, which we've been feeding out to the hogs.  It certainly won't be enough to meet all of their feed requirements, but it is neat to be able to provide some of their feed ourselves.

Speaking of the hogs...  While walking around in the hog enclosure with Rachel and Henry, one of the hogs started nibbling on our dog Bilbo's leg.  At first he assumed it was playfulness, and reacted accordingly.  Then the hog persisted and started biting a little harder, at which point Bilbo realized with horror that he was on the menu.  He quickly forgot about it though, and followed Rachel back into their enclosure the next day.  When I wandered over to talk to her, Bilbo was hiding in the bushes, afraid that the pigs were going to eat him again.  He only came out after we assured him that they were gone.

------------------------------
A lot of people wonder exactly why we're doing what we're doing out here on our farm.  Really, what's not to like about starting a business where we'll likely never make more than $5/hour if we actually turn a profit?  As an added bonus, the raw milk dairy we've started also makes us a likely target for MDA/USDA raids, as has happened with many similar operations.  Who wouldn't want to have their computers and files confiscated indefinitely as they did with this nearby dairy, or have a gun pointed in their face?

How about spending untold hours cutting, hauling, splitting, and stacking 7 cords of firewood, when we could cheaply heat with propane and have our weekends freed up?  Or how about growing our piles of potatoes, spending hours planting, weeding, and harvesting, when we could easily purchase them for a fraction of the cost (if we count our time as money).  Why work the farm with horses when tractors are clearly cheaper, more capable, and easier to use?  Or why farm at all when it's so much easier to buy our food?  What's with the whole Amish buggy thing when we have two perfectly reliable cars sitting in the driveway?

I've been asking myself these same questions.  Sometimes I'm sure I know the answers, and other times I'm not so sure.  Thus far, the answers still seem to make sense, as we keep doing everything.  Here are the answers that work for me...

Green Acres
Most everyone has a bit of nostalgia for "The Country Life", though most folks are smart enough to shy away from acting on it.  There are all sorts of benefits to living a rural life, like the freedom to go tinkle just about anywhere we want to.

I suspect this is how my grandmother views our endeavors.  She makes lots of comments about clean country air and the like when I speak to her on the phone.  But I suspect she still thinks we're nuts, and will soon come to our senses.

Adventure -- The Cure for Boredom
I don't like sitting still.  Spectator sports bore me to tears, as does most TV programming.  I'm the sort of person who will walk for an hour to avoid waiting 10 minutes for a 10 minute bus ride to the same destination.  I haven't endured a single minute of boredom since we moved here.

Last night I got to wrestle with a very agitated Maggie the cow as I put her in our shoeing stocks to get an infected foot bandaged up.  After two hours of pulling her to the stocks, dodging kicks, well aimed geysers of manure, and her urine soaked tail, I was definitely not bored.  I wasn't very clean, either.

Peak Oil
I've made references to this before.  Suffice to say that I think the near future will be very different as global oil production begins to decline.  Food and manufactured goods will become both scarce and expensive.  The economy turns south on a permanent basis (oh wait -- that's already happening!), leading to feedback loops which I think will ultimately result in the collapse of the electrical grid.  I wouldn't be the least surprised if it leads to a collapse of industrial civilization within my lifetime (which is a good thing for the survival of the human race).

The more I prepare, however, the more I realize that my preparations are likely futile.  I figure it's always good to hedge your bets though.  Growing our own food and running the farm with draft animals seems prudent given what I believe is coming.  So does buying a buggy.  They might help us transition to a low-energy world if the transition is of the slow variety, but I suspect the transition will be tumultuous enough that they won't make much difference in the end.

Sure -- none of the stuff we're doing is necessary at this moment in time, but I see it all as having significant educational value.  It makes sense to know how to do this stuff before it may become a necessity.  I know a lot of folks have a "we'll cross that bridge when we come to it" attitude, and I think it's going to bite them.   Build your boat before the floods arrive, eh?

Climate Change
Continuing with my Chicken Little theme, I really do think the sky is falling.  You'd have to be nuts to believe that we can release an eon's accumulation of fossil carbon into our atmosphere without significant consequences.  We're already witnessing the death of the oceans -- an event which many people don't seem to recognize the significance of.  Anyone seen this google map of the recent fires in Russia?  Think of it next time you hop into your car or fly somewhere for vacation.

I'm not worried about saving the planet -- it's us humans I'm worried about.  I think we're probably past the point of no return as far as CO2 emissions are concerned, but...  it's always good to hedge your bets, as I said.  That's why we're spending weekends cutting wood and learning to use fossil-fuel free transportation.

Henry has developed a new tool which may help us convince people to give up their fossil fueled lifestyles.  It's still in the development stage, but looks quite promising. 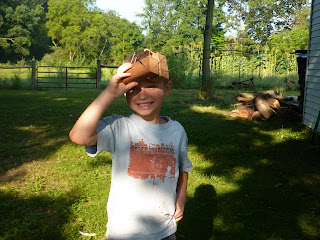