As a brilliant inventor and statesman, a progressive farmer, and a tireless advocate for liberty and morality, Thomas Jefferson has a rightful place as one of our nations most respected founding fathers.   But despite his many excellent qualities, he actively and knowingly destroyed the lives of other people for his own personal gain.  Over the course of his life, Jefferson was known to have owned 600 slaves.

How is it that somebody who was so obviously brilliant and otherwise morally outstanding plays a part in the destruction of 600 people's lives?  A character flaw, perhaps?

As with any other person, Jefferson's benchmark for morality was set by the norms of the society he was a part of.   With a few notable exceptions, that society had no qualms with the enslavement of other people for their own personal gain.  Something which would appear to be unquestionably immoral to an outside observer was thus unquestioned by the society that benefitted from this behavior.   Morality was based not on right or wrong as we would like to think, but rather upon a lemming-like consensus among peers.

You and I are no different.  We base our moral benchmark upon the norms set by our present day society -  not upon right vs. wrong.  Not only does the collective conscience of our society turn a blind eye to our behavior, but it effectively punishes those who would question it.

The primary difference between Jefferson's moral failure and our own is that his actions had direct impacts on people he knew and saw on a daily basis.  Our moral failures are a bit more nebulous, and thus more difficult to address.  All we can be sure of is that our actions are likely to destroy the life of people unknown, in ways we can only guess at.  In fact, our own lives are likely to be among those destroyed - by ourselves.

Though Jefferson did speak out against slavery and make efforts to end it, he remained a slave owner until his death.  I'm sure the benefits to be realized as a slave owner were very difficult to give up.  I know I'll be the same in this regard, as the benefits of my fossil fuel use are also very difficult to forego.  I'll continue to destroy the lives of people and animals unknown, for my own personal gain and convenience.  But I still plan to chip away at my own dependence.

Truth be told, no human has ever walked the earth without adversely affecting other people or animals.  Our ancestors hunted desirable species to extinction, negatively altering their own environments.  Our agriculture has had negative impacts all the way back to its infancy in Mesopotamia.  It's simply not possible to be a no-impact human.  It is possible to be a low impact human, however.  Modern American society makes each of us far more destructive than our ancestors by an order of magnitude.  Each of us needs to strive for lower impact, both as a moral imperative as well as for the self interest of perpetuating our species.

The thing is, we'll never know exactly which of our actions were responsible for which effects.  Just as the x-ray of a lung cancer patient has no Marlboro logo which would allow us to determine the exact culprit, no future dustbowl will come with a BP or Peabody Coal logo.

I believe that the massive and unprecedented heat wave and fires in Russia are a direct and tangible result of my own fondness for driving to the mountains so that I could go skiing.  But nobody will ever be able to pin it on me.  Am I innocent because everyone else was also driving cars too? 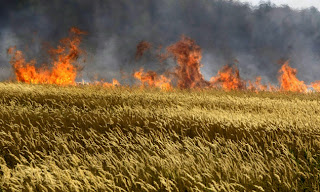 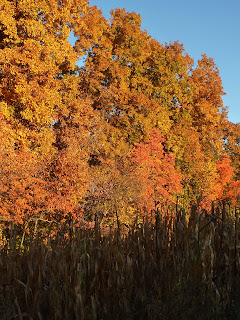 I like winter.  The trees whistle as the wind blows through their leafless branches.  It reminds me of one of my other favorite sounds -- wind whistling through the sailboat rigging in a marina during a storm.
In spring, just after we're done with our maple sugaring, the peepers (listen to them here) come out﻿, soon to be followed in summer by the orchestra of bugs running day and night. 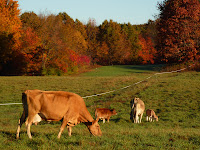 Fall seems to be the quiet season, but what it may lack in sound is made up for with a spectacular color display.
There's also a "feeling" that goes with fall. Contentment, perhaps. The barn is full of hay, the wood pile is stocked for winter, and everything we raised this summer is now stuffed into the freezer, pantry, or root-cellar.  We're still busy, but the sense of urgency is gone.  There's no hurry to get the hay put up before the next rainstorm hits. 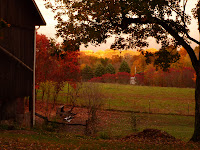 Two weekends ago we used the horses to spread some of the barnyard manure on our hayfield.  Everything went well until the 5th load, when one of the drive chains broke.  It didn't bother me a whole lot, 'cause I was ready to take a break anyway, and it should be an easy fix. 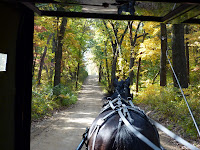 The break gave me the chance to take Bobby out for another drive, which I wanted to do anyway.  We've been getting out once a week, averaging about 10 miles.  There are miles of gravel roads just south of our house, weaving through a wooded wildlife area bordered by small farms.  Couldn't ask for a nicer spot to take a sunday drive.
Twice now, we've passed an elderly woman sitting in a lawn chair in her front yard, bundled up and enjoying the fall weather.  She absolutely lights up when she sees us, waving enthusiastically.  That never happens when you're driving a car.
10 miles seems to be about Bobby's limit without taking a rest.  Anything much more than that and he starts to slow down.   That's one of the reasons that older towns were rarely spaced more than 10 miles apart;  it simply wasn't practical to travel much more than that before the advent of cars. 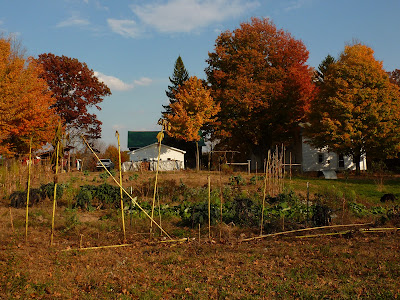 ________________________________________
Our old ram Thunder wore out his genetic welcome, spurring us to find some new blood for the flock.   It just so happened that Tillers International (where I took my draft horse classes) was looking to sell their merino ram.  I remembered him from my classes, where he always tried to parade in front of the horses when we hitched them up.  As luck would have it, someone living just a couple miles from Tillers was interested in Thunder, so we dropped him off and picked up our new ram on the same trip.  Thunder found himself with two nice ewes, who immediately garnered his attention and made him forget all about the traumatic move. 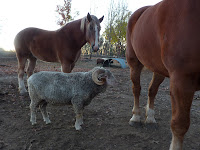 Bam-Bam, as we've named the new ram, looks quite impressive with his large curled horns -- like a rocky mountain bighorn sheep.  He felt right at home with our draft horses, who look just like the horses he's familiar with from Tillers.  He walked up to each horse, extended his right hoof in the air (as if to shake hands) while cocking his head to one side and flicking his tongue.  Bruce (our lead Belgian draft horse) wasn't so keen on this new self-appointed friend, and tried to kick him.
Bruce knew I didn't like that behavior, and sulked a bit as I scolded him.  Walking back to the barn,  I turned around just in time to see Bruce pick Bam-Bam up in his mouth (ala Tyrannosaurus Rex) and drop him.  I half expected to find Bam-bam mortally wounded with a massive chunk of flesh hanging from the middle of his spine, but he appeared to be unscathed and undeterred.
_________________________________
We've been looking at wood stoves to replace the electric stove in our kitchen.  The new stoves go for somewhere between $4,000 to $7,000, which seems a bit much.  They also use a lot more sheet metal where the older stoves use cast iron. 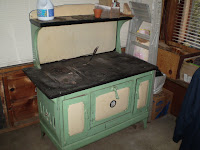 We finally found a neat old 1930's Kalamazoo Stove Company model for a good price, which we'll be cleaning up and installing some time this winter.  I was especially fond of this stove because it has a water jacket;  essentially a loop of pipe near the firebox which allows the stove to function as a hot water heater.
Slowly but surely, we're chipping away at our electricity use.  Some appliance replacements are easy.   The wood cook stove, while it will be a bit less convenient than the electric stove, isn't such a big change.  Going without a dishwasher takes a bit more time as well, but it's not a big deal either (Rachel disagrees).  The refrigerator could be replaced with an ice box (got one) and icehouse (not yet built), but that will be a big drop in convenience.  As it is now, I don't think we have the time required to make many more changes.
I think two of the most difficult appliances to do without will be the washing machine and freezer.  Right now we can toss a load of laundry into the washer on a whim.  Historically, most families had a designated "laundry day" each week.  Losing a few hours a week would be a big deal.
There really is no non-electric equivalent for the freezer, unless you count a smokehouse and lots of salt, or canning and dehydrating as an alternative.  There's always the option of a solar powered freezer, but the associated battery banks, charge regulators, panels, and the appliance itself are all both expensive and complex, and thus prone to high maintenance.  They would contain enough embodied energy to negate any environmental benefits.  Suffice to say that the regular AC powered freezer is a huge convenience that will be sorely missed someday.
Yet the fact remains that most people in the world get along just fine without *any* of these appliances.  I guess it's all a matter of adjusting the paradigm we've come to accept as "normal".
I figure that our low energy future will look a lot like our low energy past.  Travelling more than 10 miles will be an unusual occurence.  I'll bet that we don't wash each garment after a single day's wear.  A closet full of clothes will be something for the wealthy, whereas most of us will probably return to the historical norm;  one set of work clothes, and another set of dress clothes (if we're wealthy enough for the latter).
A 3,000 sqare foot home will again be a mansion or a multiple family dwelling both because the materials to build or maintain a house of that size will be prohibitively expensive (if they're available), and heating such a space will also be expensive and/or laborious.
I don't see this as a grim future, however.  It's just a change.  Some of it will be good, some of it bad.  It'll just be different from our present reality.  Embracing it before it embraces us seems like a good idea.
_______________________________________ 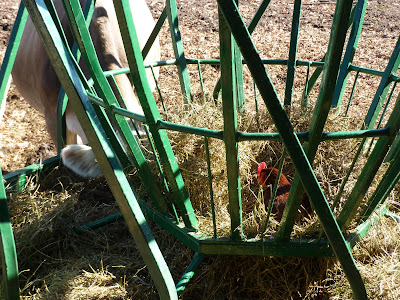 Some of our hens have discovered that the new hay feeder makes an excellent high-security nesting box.
Posted by David Veale 1 comment: